A personal note and preamble…

At the beginning of this unusual and unexpected year, I was optimistic and positive that the pandemic lockdown would give us all, individually and organizationally, an opportunity to refresh, renew, rethink, revalue, rebuild, and restructure.

For me, it has done all of those things, but it has also become a time of discovery and appreciation that came from two events colliding: a personal medical event and the beta version of FOHI’s digital archive site arriving in my inbox.

Since the nonprofit incarnation of Friends of Hog Island came into being in 2010, beside providing financial and volunteer support, it promised to preserve the legacy of the Hog Island Audubon Camp, meaning its archival history — thousands of photographs, old films and other historical material that had been in closets, boxes, and cellars. Through the generosity of many, this digital archive created by HistoryIT is now weeks away from its public debut and being saved forever.

In exploring this digital archive, a grand pattern in Hog Island’s history emerges — the unwavering generosity of all those who attended its classes. Since the beginning in 1936, the Hog Island Audubon Camp and the island itself have engendered a desire for its continued existence. In 1937, a well was needed; campers rallied and gave the needed funds. In 1938, to escape chilly days and provide a gathering place, campers funded and built the Fish House. (Many of us have warm memories of singing, sharing stories, learning, dancing, and more within its wooden frame, which has changed little from the day it was built.) Then when two hurricanes caused damage to the island in 1954, campers old and new rallied to raise $10,000 to help with repairs.

Generosity further manifested itself in campers forming a group called the Friends of Hog Island at the behest of Virginia (Ginny) Cadbury in 1998. This group of campers, former staff, and friends raised even more money to pay for items to keep the camp going, including a big boat to carry campers on field trips to Egg Rock and other islands. They had no legal standing just a passion to raise needed funds for their beloved island. Because of turbulent economic times, FOHI could not prevent the camp from being transferred in 2000 to Maine Audubon, which likewise ran into continued financial difficulties resulting in the island once more being transferred back to National Audubon in 2009. Despite valiant efforts by everyone, cold reality set in: it appeared that the camp they knew was gone. It was time to go home. National Audubon would be signing over the island to another local camp.

About that time, a former camper fell in love with the moss-covered paths, the drooping lichen in the stately spruces, the Winter Wren filling the forest with its own symphony, the sense that the forest and land had witnessed so much through the centuries, the fresh air filling every cell, and the ever-present silence of nature: dripping dew, rustling leaves, lapping waves, old trees creaking.

Because of that love for the island, I moved up the road from Hog Island in the fall of 2009 from North Carolina, eager to attend camp in 2010 after hearing that Steve Kress was forging ahead with four sessions. Instead, I volunteered for six weeks including all four sessions. During that time, I learned that the camp was in imminent danger of transfer to another local camp (within 11 weeks).

Devastated and incredulous, I thought, “How can this be possible?” My former life and work experience embodied making the impossible possible. I knew little of the history of Hog Island and had no time to learn. I could only see the future of what it could and would be if only funds could be found — despite warnings that all cards and favors had been called in and that no one standing had the strength to continue a losing battle. Added to that, I was an outsider and a stranger.

I had to move fast and with laser precision. While I worked on strategy and filing 501(c)(3) forms, “Seabird” Sue Schubel worked on detailing the historical significance of the camp and Eric Snyder worked on finding the deed to the island. Just before Thanksgiving 2010, I met in New York with David Yarnold, CEO of National Audubon. Surprisingly, we found that we agreed on many things. A few days later, he asked if I would write a three-year business plan for the island and raise a $1 million in time for the May 2011 NAS board meeting. I agreed.

Fast forward to 2020. The new FOHI thrives under its 501(c)(3) nonprofit status, taking care to honor its annual financial and volunteer commitments to the camp, and fulfill other needs, including solar panels, refitting the kitchen and Fish House, restoring the Bingham Cottages; the list is legion.

This historic island and camp, through the efforts of so many unsung supporters now thrives. More encouraging is that all concerned parties — National Audubon, Friends of Hog Island (old and new), and Maine Audubon have found a path of mutual respect and collaboration. Collectively, we look forward to many more years of cooperation — embracing new leadership, new audiences, new laws, new outlooks — with the goal of preserving the natural world that we all value and have discovered anew during this year of lockdown.

Such success would not have been possible without everyone who gave generously of their time and funds, without the willingness of leaders to work together, without the staff finding ways to collaborate on programs, and without the passion embodied in Hog Island’s history.

For me, the collision of two events brought time to appreciate all those before me who endured the uphill struggle to see the breathtaking view — especially Ginny Cadbury, with whom I enjoyed a three-hour animated visit and a brief exchange of correspondence. We continue to save the place we love. As David Yarnold said in 2011, Hog Island is Audubon’s “True North.”

Stay tuned for the announcement of FOHI’s archival website and be ready to likewise explore, learn, and appreciate all that has been and see the future.

Despite being closed for 2020, Hog Island staff deftly switched to offering online programs for campers. All five were howling successes: two teen camps; two “family camp in a box”; and one Puffin Islands. Check out the tentative schedule for 2021 and these online sessions. 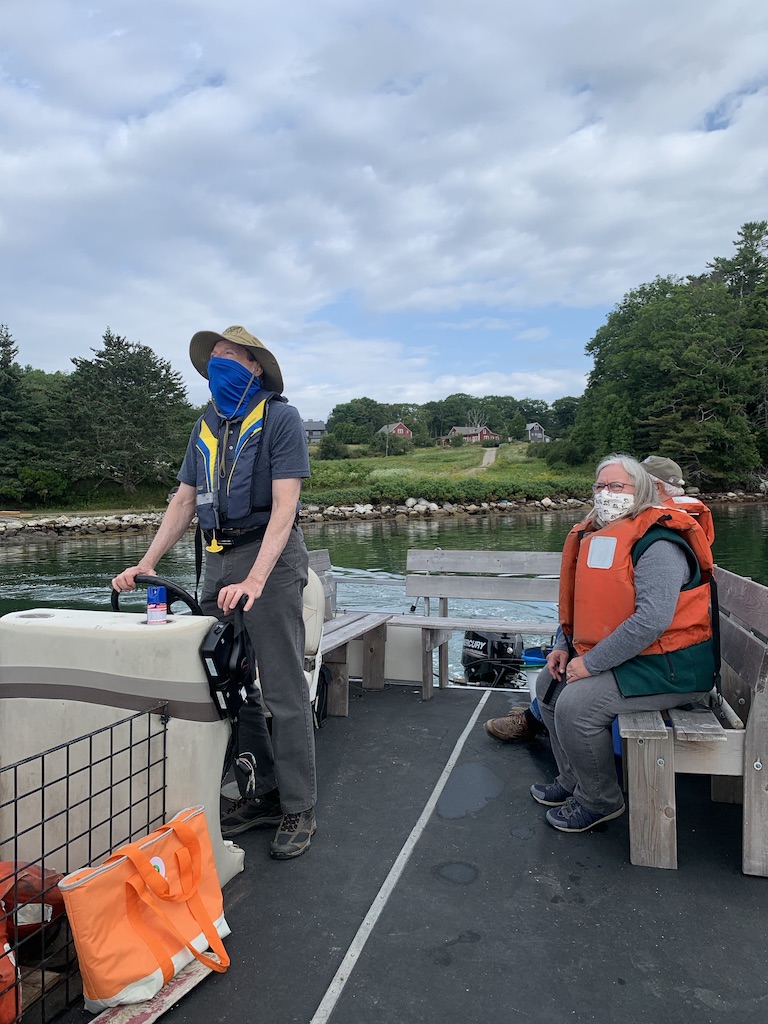 The closing of the island allows time for work on some of the infrastructure that cannot be done while camp is in session or in the cooler months. It also allows time for nature to renew itself. A few neighborhood FOHI volunteers have been weeding the gardens. The island has seen a lot of traffic from boaters exploring the island trails.

As for all our campers and FOHI volunteers, we miss your songs, your joy, your humor, and your smiling faces! Keep putting one foot in front of the other and look to the sky, birds, and nature.