The Season Begins with Good News

It was a bold step, when FOHI reconstituted itself in October 2010 and became a 501(c(3) nonprofit in March 2011. Not only did it become a nonprofit but it promised to raise funds to support the Hog Island Audubon Camp, provide it with volunteers throughout the season, write a business plan, preserve the legacy of the island, make an annual donation of $50,000, and raise $1 million dollars for the Hog Island endowment. 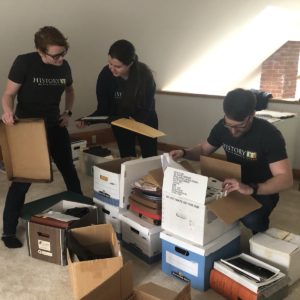 Ten years later, after having almost achieved its promises and hiring a volunteer coordinator to manage volunteers, it had one promise unfulfilled: preserving the legacy of Hog Island. In April 2019, FOHI took another bold step. Its board unanimously approved the president’s proposal to hire HistoryIT, a Maine-based company, to digitize the archival records of the camp and to make them available online, so they can be easily searched and explored.

After hearing the news, Dr. Kristen Gwinn-Becker, CEO of HistoryIT, expressed her great appreciation for FOHI’s commitment to preserve and share this important history. She commented, “The Friends of Hog Island have really made an investment in the future by ensuring that this history is not lost. This archival collection is rich with stories waiting to emerge. It is a powerful example of how much history is locked away at the local level, in need of organized efforts to save them. We at HistoryIT are very proud to be a part of saving this vital history from our home state.”

Hog Island’s history is a testament to the tenacity, resilience, perseverance, optimism, passion, and hard work of all those who have been touched by the island — from Mabel Loomis Todd who first saw it as she sailed by to you who are reading this, and to all who will come. FOHI is elated to preserve this rich history that can now reach new audiences, rekindle old friendships and memories, and encourage research. Rachel Carson, Mabel Loomis Todd, Millicent Todd Bingham, Bart Cadbury, James Baker, Duryea Morton, and so many others will be just a click away — no longer languishing in dusty closets and attics.

It is hoped that the archival website will be ready at the end of 2019 as a fitting 10th anniversary commemoration for FOHI as a nonprofit. 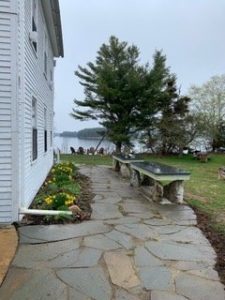 Monday, May 13 found 40 FOHI volunteers arriving at the camp from far and wide, including a gathering of the Cadbury and Wong clan, 14 in all! It didn’t take long for everyone to roll up their sleeves, locate the To-Do Ta-Da board, choose their tasks and like whirlwinds they were off and running, not even unpacking their bags! The sun shone and all was good.

In four and a half days, they dismantled the old and built a new deck on The Helm, helped rebuild the staff dock; load and unload lumber and granite tabletops each weighing almost 900 lbs; paint buildings as needed interior and exterior; glaze windows; build shelves; fix plumbing; install two new gardens; lay stone walkways; unpack specimens; mop and sweep all buildings; hang curtains; put together a drying cabinet; help clean the kitchen and prepare meals and clean-up afterward; put in the tide marker; unpack the store inventory; plant trees; and much more. The cold, wind, and rain did not dampen their spirits! 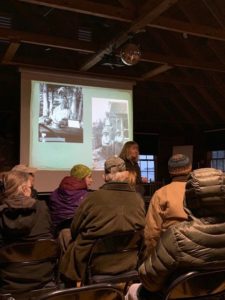 A last-minute treat was a presentation Monday evening by Julie Dobrow, author of After Emily, which tells of Mable Loomis Todd, Millicent Todd Bingham and Emily Dickinson. Julie’s presentation kept everyone engaged with photos, stories, and insights. She received a  rousing round of applause.

But the best is last. The workweek ended with a proposal of marriage and an acceptance — champagne flowed and laughter filled the air. What better way to start the Hog Island Camp season with promise of new life and vows.

Thank you all for making so much happen, volunteers and staff!

Check out the sessions offered this season at camp; some still have spots open, but they won’t be for long! There are also a few volunteer slots open. Always put your name on a waitlist. Stuff happens and people have to cancel! See you at camp.