Change is in the Air

Spring in Bremen is desperately trying to get a foothold. Snowdrops, crocus, daffodils and many other harbingers of spring are popping up only to be blanketed with snow again, but the birds know it’s spring!

The Search is Over

An intrepid FOHI volunteer coordinator has been selected from among a fine line-up of applicants: Tony Ferrara. Tony was a camper on the island in 2016 and 2017, attending Raptor Rapture and Field Ornithology sessions. He worked as a web and database professional, and will be retiring from this career in April to pursue his passion for the mission of Hog Island. He and his wife Cheryl will be moving to Maine from Florida after his retirement.

Tony was a volunteer beach steward on Marco Island, Florida, for many years, and served as the volunteer coordinator for that program. The beach stewards keep the beach clean, protect birds and other wildlife, and engage with tourists and residents to make the beach a safe and enjoyable place for everyone. Tony also served on the Beach Advisory Committee for the City of Marco Isla 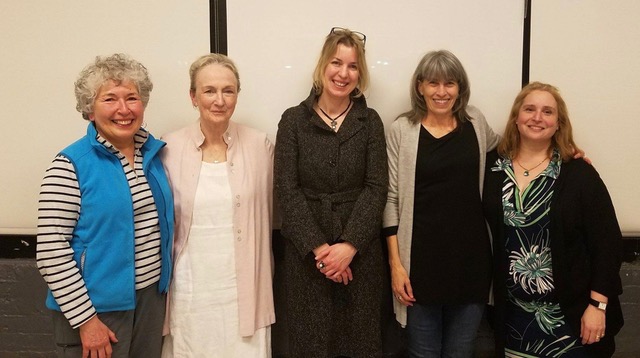 On March 20, a few die-hard FOHIs were in New York City to see the reading of Woman of the World, by Rebecca Gilman, as part of the Miranda Theater’s First Annual Liz Smith Reading Series. The reading performed by the legendary Kathleen Chalfant brought the audience to their feet. The reading and the play—about Mabel Loomis Todd’s complex life as Emily Dickinson’s posthumous editor and rescuer of Hog Island—ignited a new interest in the Hog Island Audubon Camp and FOHI’s work. Rebecca is a professor of playwriting and screenwriting at Northwestern University, an artistic associate at the Goodman Theatre, and a birdwatcher. She is a former camper at Hog Island and it’s first Artist in Residence. FOHI had sponsored an earlier iteration of the play that had been performed at Hog Island.

What Else is Popping Up?

FOHI’s 2017-18 year-end news is out, so you can catch up on latest figures and happenings. Camp registration is at 82 percent, so check out the sessions and find one right for you. FOHI volunteers were the early birds this year, filling up most of the volunteer slots by February! But don’t despair, we still have two sessions in August that need volunteers and cancellations always happen, so put your name on the wait list even though it may say full! Also welcome, Anthony Pizzarello to the Hog Island team as co-chef. He and Kristi Bokros will be sharing the chef position.  The Hog Island team and FOHI are already chomping at the bit with excitement about the new season.

See you on the island!