At The 70th Reunion

The beds were all made, the paths were tidy, the front rooms of both the Port Hole and the Queen Mary had been transformed into lovely sitting rooms with vases of flowers and stone lamps, hand-made by Sue Schubel and her willing Student Assistants, there were fresh flowers on all the tables in the dining room, and the gardens were weeded and blooming profusely. All in preparation for the big birthday party — the 70th anniversary of the founding of the Audubon Camp on Hog Island in 1936, from July 24-26, 2006.

All 51 participants were greeted by smiling staff members as they walked up the path from the dock, some for the first time in more than 40 years. You could say it was an emotional moment! Some of us were recent campers, some were former staff, and some were friends of the Camp from way back — but it pleases me to focus on what I like to call “The Three Musketeers.”

John Orndorff, Jerry Krummrich, and Marv Dembinsky were all “kitchen boys” (the term is now “Student Assistants”) in 1965, when Bart Cadbury was the director, Ginny Cadbury oversaw the kitchen and the boys who made it run, Don Borror taught Insect Study, Art Borror taught Marine Life, Farida Wiley was the Botanist, and Joe Cadbury and Barry Transue were the Ornithologists.

None of the “Musketeers” had been back since 1965, and when I wrote or telephoned them to see if they were interested in attending the reunion, their response was ecstatic and immediate, and is best summed up by Marv’s email:

“Hello Betsy! When I opened the letter I received yesterday from you, I was nearly overwhelmed with emotion. I was a mere lad of 18 in the summer of 1965. My stay at Hog Island was the most important summer of my youth, a turning point in my life.

“I have many memories of that summer … Karl the Cook, the Cadburys, botanizing with Farida Wiley, Dr. Borror, hauling luggage for the campers, lobster dinners, my fellow Student Assistants, including Carl Freeman, Jo

“Betsy, it would be terrific to come out and visit, and so my wife Carol and I are researching and planning the trip today! It was great to hear from you, and I look forward to our visit.”

One of the joys of the 3-day reunion was watching these men and their wives, and in John’s case 2 sons, reconnect after so many years. Their pleasure in exploring all their old haunts on the Island was palpable, and tears and smiles mingled as all the emotions poured out — joy at reunion, nostalgia for times past, happiness at seeing Hog Island still operating and educating both adults and young people in conservation and environmental lore. 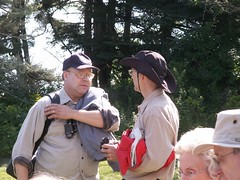 All three men have gone on to careers in the field of ecology in one form or another: both John and Marvin became biology teachers (Marvin has since branched out into photography), and Jerry continued his career as a freshwater fisheries biologist with the Florida Fish and Wildlife Conservation Commission. They exemplify the “why” and “wherefore” of the Audubon movement.

There was a wonderful feeling of continuity, created by the presence of several former directors, including Dur and Peggy Morton, Steve Kress, Mike and Margie Shannon, plus two connections from the earliest days of the camp: Mary Carol Massonneau (daughter of first camp director Carl W. Buchheister) and her son Rob, and Ginny Cadbury, wife of recently-deceased Bart Cadbury (director from 1958-1968).

Camp Director Seth Benz and his staff made a true “happening”. No stone was left unturned, so to speak, to make our stay pleasurable and exciting. Dur Morton gave a short address and slide show on our first evening, emphasizing the importance of keeping nature in our lives if only for our emotional health, and Steve Kress continued with a short history of Hog Island and a brief discussion of his seabird restoration project. 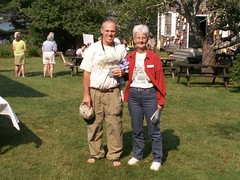 The second day sped by, starting with an early morning birdwalk, led by Art Borror and Tom Leckey. After breakfast, some set off on a boat trip to see the puffins at Eastern Egg Rock, while others walked around the Island or explored the Bingham Cottages. After lunch we had a presentation by Maine Audubon’s Executive Director and Camp Director Seth Benz of Maine Audubon’s Operational Plan for the future of Hog Island. Several other key members of Maine Audubon’s leadership joined us for the day and held an open forum for discussion. Inspiration and ideas flowed as participants warmed to the excitement of perpetuating the magic of Hog Island for future generations.

The elegant evening cocktail party was followed by a luscious lobster picnic outside on the lawn. Chef Janii Laberge and his SAs outdid themselves, and we gorged on fish chowder, corn on the cob, salads, and a special birthday cake, in addition to the aforementioned crustaceans. The supper was followed by a mellow evening of reminiscing, watching slides of former staff and campers from the 60s and 70s, and an old-fashioned campfire like the ones in the “olden” days, led by Art Borror, Seth Benz, Peggy Cadbury and yours truly.

Our final morning began with an intertidal exploration with Art Borror, and more walks on the Island. A grand time was had by all, and we left vowing to stay in touch and to keep Hog Island close to our hearts.