Sustaining the legacy of Hog Island

By Seth Benz and Tina Mattingly

The Hog Island Audubon Camp will be 70 years old in 2006. There is much in its illustrious past to celebrate, including scores of folks that have contributed mightily to its success.  The challenge now is to create a sustainable future.

Located off midcoast Maine, Hog Island has been a national treasure to environmental leaders and nature lovers for nearly 70 years.  In its early years, Hog Island was home to the Abanaki people, who fished in its clam-rich waters.  In the late 1600s, the island was purchased by European settlers who cleared the lands to establish farms, which are still evident today by centuries old rock walls. Like many islands off the coast of New England, Hog Island was named after the livestock that roamed its new-world pastures.

A Family Dedicated to the Natural World

Due to the fortuitous trip of two strong-willed nature lovers, the island was purchased and preserved before it could be settled.  In the summer of 1908, David Todd, a professor of Astronomy at Amherst College, and his wife, Mabel Loomis Todd, a woman accomplished in art, literature and the natural world, visited Hog Island while cruising along the coast of Maine.  Mabel Loomis Todd, appalled by the haphazard timbering she saw, was determined to save the island and took steps to purchase it.

The Todds built a bungalow on the shore of Hog Island, where they enjoyed summers and raised their daughter Millicent. She would soon learn to recognize common birds before she could write.  Her father would explore the heavens and her mother studied the flowers, ferns and mushrooms, and served as the island’s first conservation steward by protecting the area from hunters and careless picnickers.  There were always lessons to be learned about the woods, heavens, and ocean when the Todds were on Hog Island.  It was a magical experience — and one they knew would require a special commitment to ensure that experience for future generations.

In 1932 Millicent Todd Bingham inherited the island upon the death of her mother.  She said,

“When I walked through the woods and listened to the Thrushes, the cry of the Osprey circling over head, or the boom of the Great Horned Owl at night, I could never feel that I owned such a place.  It seemed, rather, the property of all who cherished it and who wished to preserve it for others who would cherish it likewise in years to come.” 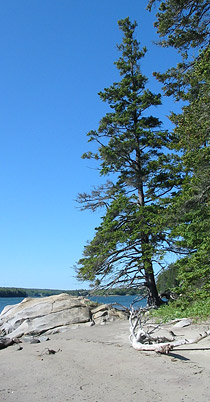 With enormous determination, many road blocks to overcome, and the life insurance money her mother had left her, Millicent was able to find a willing partner to protect this great island in the National Audubon Society’s newly elected Executive Director John H. Baker in 1935.  The timing could not have been more perfect, as the leader of this respected group had been looking for a place to launch the organization’s first Nature Study Camp for Teachers and Adult Students.

A Pioneering Concept That Changed Conservation

The Audubon Society has always attracted scientists and environmental leaders who are pioneers in thought, study, and practice concerning the most expansive ways to protect our natural world.  It was this devoted group of leaders who recognized that growing a sustained and genuine interest in the natural world would lead children and adults to support the critical need for conservation of all natural resources.

It was here that teaching about the complex interdependence of all forms of life, from the 150 varieties of birds identified on the island to the ferns, lichens, and mosses of the forest, became a model for environmental educators.  It was the vision of Audubon that all who stayed at the camp would gain this awareness and learn the skills to become responsible environmental citizens.

What began as a dream has become one of the nation’s and conservation’s greatest success stories.  The teaching staff includes some of the most respected naturalists and environmental educators in the country, and they interpret the special habitats of, and surrounding, Hog Island with care and enthusiasm for all learning levels. Most importantly, even today they demonstrate the interaction of natural systems.  This combination has provided a unique experience for more than 20,000 teachers, who have in turn reached outward to hundreds of thousands of additional students since the camp’s inception.

Many conservation leaders have launched their environmental careers from the Hog Island Audubon Camp.  Several have gone on to make significant contributions to conservation on a national scale. Rupert Cutler served as Assistant Secretary of Agriculture in the late 70’s. Roger Tory Peterson became the recognized originator of the field guide and published the Peterson Field Guide Series.  Steve Kress reintroduced puffins and terns to several nearby islands off the Maine coast. Rachel Carson gleaned inspiration in the 1960’s on Hog Island. Few can spend time on Hog Island and not be fundamentally affected by its profound beauty, ecological significance and astute lessons it offers about the natural world. 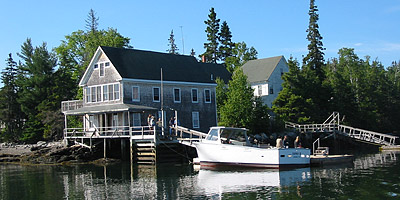 Recognizing the difficulties of operating the camp from a distance, National Audubon transferred ownership of the camp and the mainland Todd Audubon Sanctuary to Maine Audubon in 2000.  The sanctuary is open to the public and enjoyed by many visitors from the local community as well as from those out of state who walk its nature trails or learn about the camp at the Visitors Center exhibits.

Today, camp leaders and participants travel from all over the country to experience the magic of Hog Island. The staff continues to offer first-class instruction that leaves a lasting impression. The length of sessions vary from four days to two weeks, and many are designed with specific people and interests in mind such as teachers, conservation professionals, families, teens or even those wishing to connect with nature through yoga.

But the Facilities Need a Face Lift.

Like many historic and national treasures, Hog Island has a backlog of deferred maintenance. The camp facilities today do not reflect the enormous importance and history of the island and its programs.

Maine Audubon recently convened a Planning Committee — consisting of neighbors, independent camp administrators, current and former campers, and educators — to assess the needs of the facility and to determine what actions could be taken to meet growing opportunities and demands.  Contracting firms were brought out to the island to assist in devising a renovation plan for the facilities.  The objectives were to address all infrastructure concerns, maximize the spaces available and upgrade the entire facility to a level that not only meets the current needs, but celebrates Hog Island’s significance to thousands of former and future visitors from all over the world.

To ensure the future of Hog Island Audubon Camp and to build a strong foundation for continued programming, it was determined that a multi-million dollar investment is needed for building and equipment needs and an endowment as detailed below.

Rehabilitating the Main Camp, and other Buildings. “The Bridge” — which is the main building that houses the dining hall, kitchen, store, island office, and lodging for student assistants — needs significant renovation.  Also in need of significant renovation are the Porthole, a camper dormitory, and the Wash House, a bathroom and laundry facility, along with general improvements to other buildings.

Creating More Classroom Space. Converting the Crow’s Nest Dorm into a classroom space will allow the camp to take full advantage of both its architecture and spectacular location by emphasizing its views of outer Muscongus Bay.

Improving Energy Efficiency. We wish to replace the underwater electrical cable from the mainland to the island with a modern and efficient source of energy for the island.

Building New Dormitories. We would replace the Crow’s Nest Dorm — with its capacity for 16 campers in one large room — with one new camper dormitory providing modern semi-private accommodations and capacity for 24 campers.  Also, replacing current small staff dorms with one dormitory would be immensely more efficient and cost effective.

Establishing an Endowment. There is no substantive endowment fund with which to address the operational needs, including program improvements, of Hog Island.  Even with a fee structure, in order for the facility to be truly open to everyone, Maine Audubon offers scholarships, and keeps the fees as low as possible.  Doing so does not cover the costs of running the camp. It would be wise to build an endowment for the future of the camp.

Determining What is Feasible

Although Maine Audubon has identified the financial goal to guarantee the future of this conservation landmark, the organization must first ascertain what can feasibly be raised through private philanthropy for the facility and program needs to be met.  We will be speaking with close neighbors and key benefactors of Hog Island to determine what level of support is possible in order to continue the legacy of Hog Island Audubon Camp and Todd Audubon Sanctuary.  It is my hope that you will join in this effort, in the spirit of the Todd family’s founding vision, and help save this island once again for generations to come.