Rick Ylagan — a dear friend and especially important part of Hog Island — died in his sleep of an apparent heart attack on January 11, 2003. His boundless energy and consistent work were integral to shaping the camp’s current programming and design, and he was influential in the formation of the Friends of Hog Island. 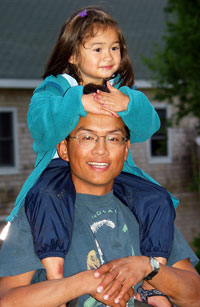 I met Rick in September of 1986 when he arrived in Maine seeking a Masters degree in education from the Audubon Expedition Institute (AEI). He had recently received his teaching certification back in New Jersey, and was eagerly looking forward to exploring the continent aboard this mobile graduate school. The expedition is a learning community comprised of some 20 students and three faculty members who travel via a modified school bus outfitted with backpack racks, cook stoves, kitchen gear, and a library. The educational premise was to study a range of environmental topics in an experiential fashion.

On the expedition, Rick slept out on the ground or in a tent every night and spent the daylight hours outside in all manner of weather. Lessons of the day were not to be found in a traditional classroom and textbook. Rather, they were derived from events surrounding a recent bird sighting, or a controversial statement heard in that day’s meeting at the fishing wharf, or the sound of the rush of wind through towering white pines. Each day focused upon the enhancement of one’s personal journey toward the understanding of the depth of connection we all have in the natural world.

While many struggled with this radical shift in lifestyle and mode of study, it came quite easily to Rick. It bolstered what he already knew and was dedicated to teaching.

The following summer he went to the Brooks Range in Alaska to conduct a nesting survey of birds on the tundra. If the school expedition was an incubation period, Rick surely “hatched” on the Alaskan tundra. He returned with wonderful stories from his Alaska adventures. One, in particular, was a long, solo hike to the Baring Sea. He was filled with excitement over this particular accomplishment. He had determinedly walked to the “roof” of the world and set foot in the cold waters of the Arctic Circle.

He was most alive at Hog Island — on the rocks, sea behind him, gulls flying overhead, explaining to people the awesome powers of the earth. —Wendy Ylagan

He returned to Maine the next school year and completed his masters work at AEI, and while doing so applied to and accepted an instructor position at the Audubon Camp on Hog Island. Then, for 14 consecutive summers (1989–2002), he shared his love of nature by teaching, as one friend put it, “with that great spark of life in his eyes.”

Rick met and married his wife of nine years, Wendy, on Hog Island. Rick loved his family and was devoted to them. He was a supportive husband and a wonderful, hands-on father to their two children, Sidney, 6 and Shane, 3. He loved taking them skiing and skating, playing games with them, or just snuggling with them as they all watched movies together.

Rick was always active. At the Audubon Expedition Institute, it became very apparent very quickly that Rick had an “itch” to be active. The Expedition practiced consensus decision-making, which sometimes meant long hours of sitting and discussing various issues. Sitting around was not his cup of tea. As a faculty member with the Expedition, I remember making an exception for Rick, allowing him to get up from his seated position in the circle and pace along its exterior while he participated in the conversation.

This need for constant motion earned him a special nickname — “The Flea” — his very first year on Hog Island. It turns out that while teaching on Hog, during rare breaks, he would sneak over to the mainland and along with Joe Johanson (the Audubon sanctuary caretaker at that time) would play tennis on a neighbor’s secluded, private tennis court. Joe and Rick were the only two people outside of the immediate family to be given a key to the court. Joe explains how his nickname came about: “To those that might not be familiar with the moniker ‘The Flea,’ it was because of Rick’s superb athletic ability to cover every inch of the court during our many ‘battles.’ He would hop, skip, and run everywhere, and as a man a few decades his senior, I had to try to keep pace while Rick ran all over the place!”

We surely know he was tireless. A typical teaching day on Hog Island would find him conducting morning field walks in geology and map-and-compass navigation, followed by a few afternoon hours of sea-kayaking, and a brief instructional session for the camp weather-forecasting team of the day. After dinner he’d compel you to play volleyball. Then after the evening slide presentation, just when you were thinking of crawling back to your camp bed, he’d pop up with characteristic excitement to announce that the sky was clear and this would be an excellent chance to learn about the night sky. “Go get your flashlights and meet on Astronomy Point in 10 minutes. C’mon do it!” he’d urge. And if the weather wasn’t cooperative for astronomy, he’d be the caller and teach us all to square dance.

Rick was a master at building community among campers. He committed their names to memory and called to them confidently. He pulled them in with that terrific smile, great enthusiasm, and boundless charm.

When kayaking with a group, at some point he’d have the group raft up so that all the vessels were side by side. Then he’d rise up out of his kayak and walk across the bow of each of the boats, balancing and laughing as he walked along. Once he demonstrated this feat, he’d dare other kayakers to try the same! Somehow he managed to keep the activity safe, fun and memorable.

He loved the outdoors, fishing, and working on wood projects. He was very involved in tennis, always trying to improve his game. In 2002, he coached the Bangor High School tennis team to the Maine State championship — and was voted Coach of the Year by his coaching peers and sports writers.

Rick was also the camp photographer. During a session he would somehow manage to take photos of all the participants while they were in action during the week. Often they didn’t know what he was up to. At week’s end, during the session-culminating slide presentation, he’d show a review of the week with campers depicted in the scenes and activities from their week on Hog Island. This came as a surprise to many of the campers, and rarely was there a dry eye in the house. 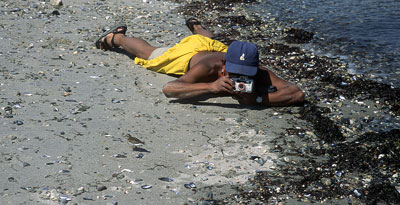 I personally believe and find solace in thinking that in each of his 39 precious years, certainly the past 16 or so years with Audubon, Rick managed to live three or four lifetimes worth of activities and events filled with gusto. He somehow found time to do it all, not by simply “going through the motions,” but by living each moment fully.

The tragic news of his untimely death is a shock to us all. Friends and colleagues, Audubon friends and past campers from across the country have sent messages and rememberances of Rick:

“Rick was a role model for life itself.”

“His handsome, round face and big, wide smile was like the warmth of the sun itself.”

“He was a dynamo: genuine, big-hearted, joyful.”

“He had so much energy and vitality. He was positive, never complaining, never angry. He loved everybody. He had a knack for filling you up with good feelings.”

“To all he met he showed a friendliness and happiness that stirred the heart. He was a model teacher, exhibiting a passion for learning, patience for teaching, and an excitement for educating.”“He’d call to you by name with such an enthusias-tic and gentle ferocity it was like all the birds singing to you at once.”

A friend from Pennsylvania shares a particularly expressive memory:

“I saw Rick this summer for a too-brief ten minute visit, but as always we immediately connected and it was as if time had not passed since our last visit. It was always like that, for Rick was such a warm, caring person with so much vivacity that one couldn’t help but be drawn to him and feel comfortable. Although my interactions with Rick tended to be limited to summers and occasional emails of pictures of the family and jokes, I have a warehouse of memories. One that I like to share with others around campfires occurred my first time at camp, which I believe was the summer he and Wendy wed, as the orgami cranes remaining from their wedding adorned the dining area. A group of us had gathered on the rocks for a late night astronomy session and one participant asked Rick a question about the northern lights. As Rick began explaining what caused the lights, the sky became bright, and we all saw—many for the first time—the northern lights.”

And from Joe and Mary Johanson, who were especially close to Rick and Wendy: “Our love and prayers are with Wendy, Sidney, and Shane, and with all who loved Rick. Hold a court for us, Rick, and we will continue yet again our very special fun between the baselines.”

As I reflect on these thoughts, I mourn the loss of the physical Rick on this earth, but know that he will live on in our memories. In the course of his 39 years, he touched a myriad of lives through his tireless energy, enthusiasm, and love of sharing his knowledge and skills. His enthusiasm for life and the joyful integrity with which he lived it shall remain an inspiration to me. We each carry a part of Rick with us—may we each honor and cherish that part.

Rest in peace Rick. We love you.