“We are warmed by fires that we did not build”

David Klinger first came to Camp in 1972 as a “kitchen boy.” His time on the island encouraged him in the environmental field. When he wrote this essay in the spring of 2001, he worked at the U. S. Fish & Wildlife’s National Conservation Training Center in Shepherdstown, West Virginia, as a writer and editor. 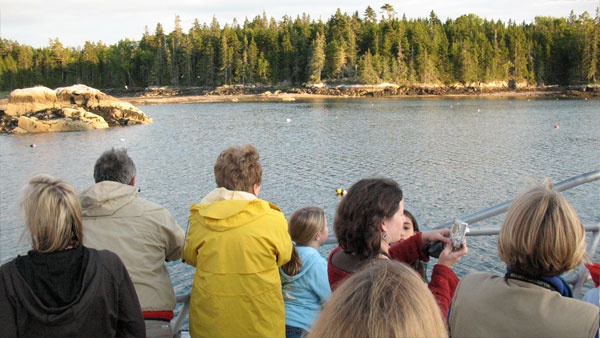 My thoughts often drift back to Hog Island and the Maine Audubon Camp. When they do, I recall the way in which John Steinbeck wrote of his own special place in nature, Montana, in his journal, Travels With Charley. “With Montana,” Steinbeck remarked, “It’s love, and It’s difficult to analyze love when you’re in it.”

Three decades since my Hog Island tenure, it sustains me in ways that I continue to discover.

I spent but one summer on Hog Island as, what in 1972 was called, a “kitchen boy” and, alternately, a “student assistant.” In thumbing through Frank Graham’s The Audubon Ark and other sources, I’m struck by the number of folks who launched their environmental careers from the Audubon Camp kitchen and who went on to make significant marks in conservation: Rupert Cutler, Duryea Morton, Stephen Kress, dozens of others. Some enterprising graduate student should undertake a study of the Maine Camp’s dish room — perhaps the most productive kitchen in the history of American conservation.

Three decades since my Hog Island tenure, it sustains me in ways that I continue to discover. I am still drinking from a well I did not dig. I am still warmed by fires kindled over the course of a single summer. It’s love, and I’ve been in it for 30 summers. 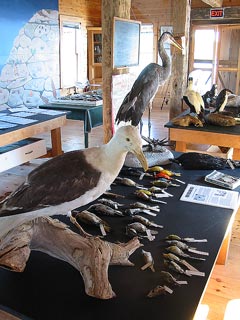 I managed to accumulate a great store of knowledge from the classes I sandwiched in between my early dishwashing and latrine duties. This trove of unorganized data remains with me even today. I can still name most of Hog Island’s ferns and can analyze the contents of a sandy bottom dredge trip. I understand the life cycle of Leach’s storm petrel. I can correctly measure the carapace of a lobster.

That I can has something to do with the caliber of instruction provided at the Maine Camp in that era. Grace Bommarito opened a whole new world of fungi and ferns to botanical novices. Steve Kress’s excitement about Atlantic puffins and black guillemots was infectious. I realize now what a precious education in natural science I was getting for free.

I also was gaining a practical immersion into the concepts of public responsibility and service — heady stuff for a 17-year-old. “The opportunity for individual growth this summer is tremendous, not only in the field of natural history, but also as a person. I would hope your greatest satisfaction would come from being of service to others,” camp director Dur Morton wrote me in his 1972 invitation to join the staff. Dur’s expectations of his staff were set intentionally high. I’m still aiming at those camp standards in my life today.

I continue to learn about Hog Island. Tom Schaefer’s thesis The Epic of Hog, since has taught me a great deal about the early history of our island. Another, Gina Zwerling’s recent Residential Adult Ecology Education, reiterates the camp’s vast potential. Anyone wanting to understand the Audubon Camp’s past and its future should peruse both.

I hope the Maine Camp never abandons its commitment to the high standards in natural resource education — and its emphasis on responsibility and service to the world — that I encountered in 1972. I trust it will never lose sight of its seminal role in the history of the conservation movement. We walk the same trails where Roger Tory Peterson birded in the 1930’s and where Rachel Carson gained her inspiration in the 1960’s. I don’t understand how anyone could spend time on Hog Island and not be fundamentally affected by this significance.

I’ve wondered, however, whether we’ve come close to risking both our intellectual standards and our historical grounding as the Audubon Camp struggles to reinvent itself. Fashions in education come and go. Priorities at National Audubon appear to have strayed elsewhere in recent years.

We cannot allow the camp program to drift nor its educational mission to atrophy. Hog Island must never be allowed to become simply a cheap summer idyll on the Maine coast. We have too much work left to do at this place.

I think the savvy and committed folks at Maine Audubon realize what a treasure has been entrusted to them. We are indeed fortunate that this place is in such good hands.

I hope the finest educational traditions at Hog Island can be sustained as we endeavor to improve and upgrade the camp’s physical plant. Conversely, I trust we can keep the learning program relevant to today’s needs and priorities while resisting any temptation to over-modernize the camp into an unrecognizable shadow of its early self.

I believe that Maine Audubon can strike this balance. I hope so.

Hog Island should always remain an “island apart” where the non-essential trappings and concerns of the modern world are left by the mainland dock. Our clocks should run slightly asynchronous to today’s digital society. The floors of the Port Hole always need creak a bit, the books in the Fish House should retain a faint smell of mustiness, and correspondence should arrive at the Bridge by hallway pigeonholes, and not necessarily by e-mail. Our daily island routine, now and in the future, should be governed by nothing more than the rhythms of the tide and the clang of the camp bell.