A place in the heart

At the top of the hill on Keene Neck Road in Bremen, Maine, I look out across Muscongus Bay to Burnt and Benner islands in the far distance. Nearer to shore, several other small islands rise out of the sun-flecked water and my eye is drawn even closer to the Queen Mary across the narrows, perched precariously on the north tip of Hog Island. 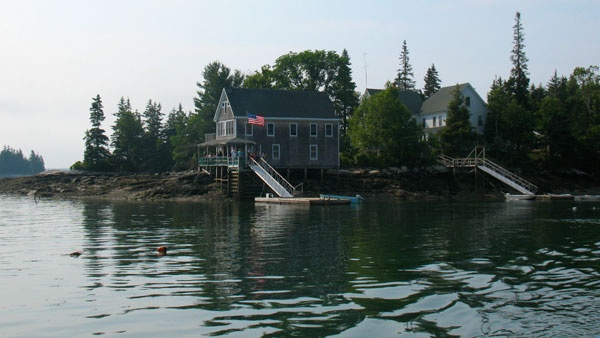 The old pattern of nature education, which stressed identification, was replaced by one emphasizing the interdependence of living things with their environment and each other.

No, it is not the ocean liner. It is one of a group of buildings that forms the nucleus of the Audubon Camp, established in 1936 by the National Audubon Society as a part of their expanding education program.

It was this view and this property that intrigued John H. Baker, the newly-elected president of NAS, in 1934, as he stood with Millicent Todd Bingham, the owner of most of Hog Island, looking across Hockamock Channel. He was searching for a proper site for his brain child: a camp where adults, teachers, camp counselors, and Audubon chapter leaders could come to learn about ecology in the field. 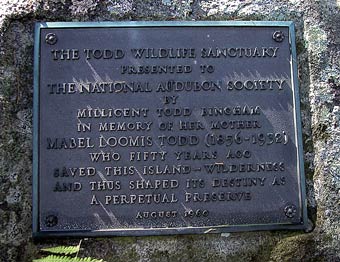 The setting was ideal. A 33-acre parcel on the north end of the island, complete with buildings belonging to a small summer boarding colony which had closed, was for sale. A purchaser was found who donated the property to Audubon, and in June, 1936, the Audubon Nature Camp was opened under the direction of Carl W. Buchheister, a private school teacher who had also directed a small camp for children.

Thus began Audubon’s camp program, which was to expand into a far-flung chain of camps and nature centers spanning the country and leading the way for other organizations involved in nature education. The old pattern of nature education, which stressed identification, was replaced by one emphasizing the interdependence of living things with their environment and each other.

Throughout its history, the camp has been blessed with several assets. A site of rare natural beauty with easy access to a variety of habitats makes field study a constant source of wonder and excitement. Over the years, the teaching staffs have been highly-trained naturalists who were able to interpret these habitats and demonstrate the interaction of natural systems. This combination has provided a unique experience for more than 50,000 campers in the 60+ years the camp has been operating.

Many camp graduates have returned as staff or gone on to other Audubon programs. In 1999, three Audubon vice-presidents were either ex-campers or staff. Others have found important positions in colleges or universities, in schools, and as Audubon chapter leaders, bringing their expertise to the benefit of all.

Bart Cadbury was director of the Audubon Camp in Maine director from 1958-68.