Before considering Millicent Bingham’s proposal to use Hog Island as a site for an Audubon Camp in 1935, John Baker — who was then president of the National Audubon Society — enlisted the help of eminent Bowdoin College ornithologist, Dr. Alfred Gross, to determine its ornithological importance. Gross was well-known for his studies of gulls, cormorants and storm petrels in the Gulf of Maine and was therefore a natural choice.

Roger Tory Peterson and Allan D. Cruickshank, among the first teachers at the Camp, ignited popular bird watching in the United States.

Gross then assigned one of his students, Olin Sewall Pettingill, Jr., to investigate the birdlife on Hog Island and vicinity. Pettingill was a natural choice for this assignment. A native of Wayne, Maine, he had conducted studies of Maine seabirds and later went on to write ornithology textbooks, bird-finding guides and eventually, assumed the position of Director of the Laboratory of Ornithology at Cornell — and for many years traveled with his movies about penguins and other seabirds as part of the Audubon Wildlife Film series.

Pettingill visited Hog Island and enthusiastically recommended that Audubon acquire the present camp property and secure it for the purpose of bird protection and education. Based on this recommendation, John Baker found a donor to purchase the site and work began immediately to prepare for the first Audubon Campers in 1936. To staff the Camp, Baker hired school teacher and amateur naturalist, Carl Buchheister, as its first Director, an appointment that would last for 22 years, until Buchheister took over leadership of Audubon as its President. Among the first teachers at the Camp, Buchheister and Baker hired Roger Tory Peterson and Allan D. Cruickshank. The careers of these two extraordinary birders ignited popular bird watching in the United States.

Peterson’s effect is now legendary, authoring dozens of books and illustrating these with his dramatic art. The Atlantic Puffin was always one of his favorites and he returned to Maine many times to paint them, always perching them on classic Maine granites, posed against stormy skies (his personal favorite hung in the Camp’s Fish House). This initial Maine seabird exposure developed into his passion for penguins and other south polar seabirds. In the first year of the Camp, Peterson’s ornithology colleague was Allan D. Cruickshank, a charismatic Scot, a pioneer bird photographer who used “state of the art equipment” — a cumbersome 8 x 10″ format black and white view camera that used glass plate film.

Burdened by awkward wooden tripods, he scaled trees and cliffs to document the birds of Hog Island and its neighboring seabird colonies. Many of these original enlargements hang in the Hog Island Bridge, Fish House, and Porthole sleeping quarters, reminders of Cruickshank’s dedication to birds and teaching. Cruickshank and his wife Helen spent 20 summers at Hog Island, photographing birds and documenting their occurrence in “The Birds of Lincoln County, Maine.” A recently discovered picture shows Cruickshank standing on his head aboard the bow of the PUFFIN I as it returned from a day at sea, a signal to campers on Hog Island that a bird rarity had been spotted during the trip. 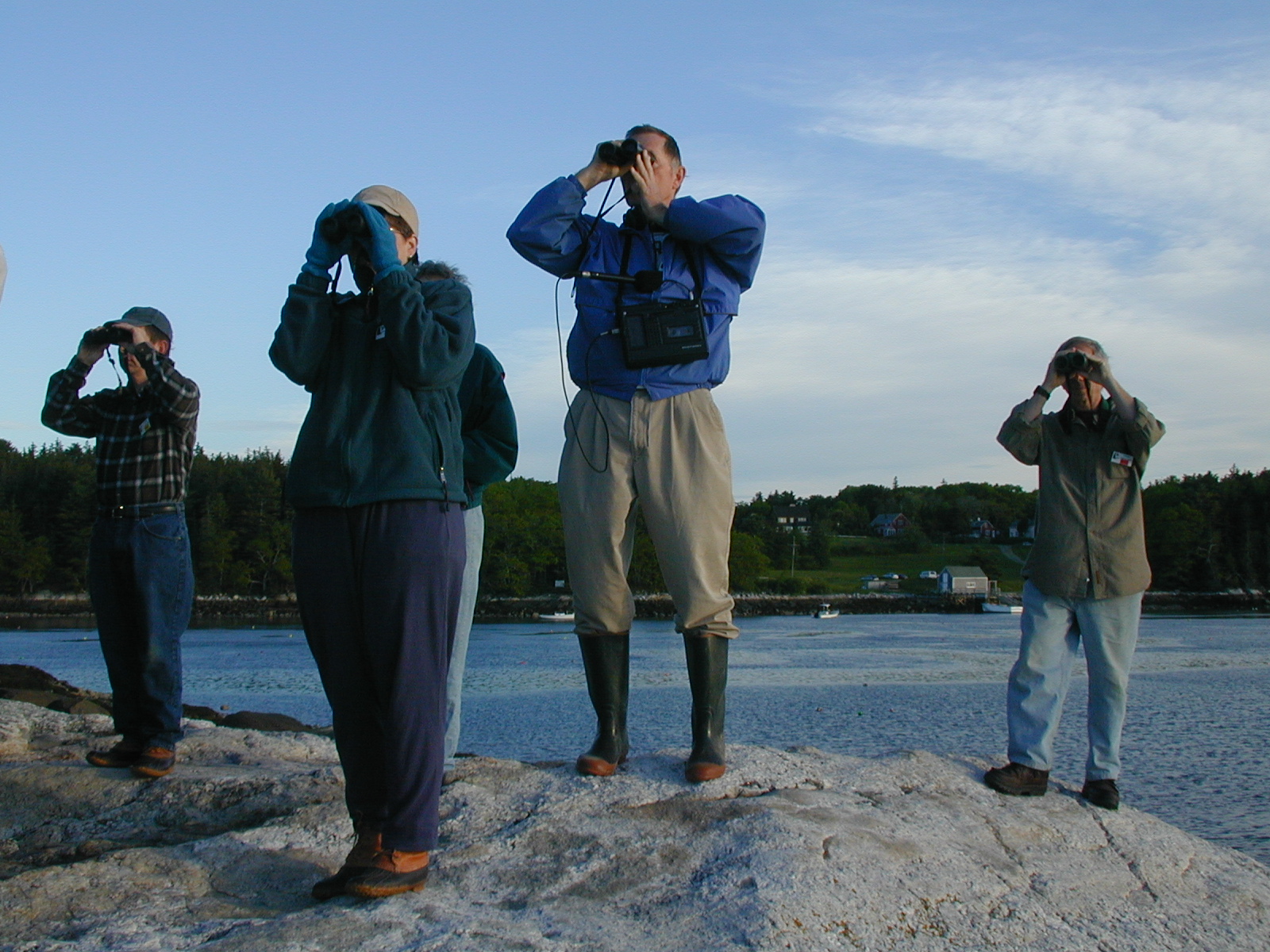 Joseph Cadbury, an instructor who shared teaching duties with Cruickshank for nearly two decades, is remembered for his passion for teaching birdlife and for banding thousands of land and seabirds. These banding efforts revealed much about the migration and winter habitat of Muscongus Bay birds, including the winter haunts of Cormorants that concentrate in Tampa Bay, Florida.